(The “video description” referenced at the beginning of the above video can be read here: [ Direct YouTube Link ] or at the bottom of this entry)

Last month I linked to a YouTube video I made that discussed visual novels and why I’m going to try my hand at them.

That video included a link to the above video, but I figured I should should give this video a spotlight, since I’d like to get feedback from people. So as the video says, watch some (or all) of it and let me know what you think. Thanks!

John receives an urgent text from a friend in the middle of the night begging him to meet at a designated hotel room. When John arrives he’s met not by his friend, but a heavily disfigured stranger.
So begins “The Grandfather Paradox”, a visual short story evocative of “The Twilight Zone” and “Black Mirror”.

Your feedback is welcome! Please let me know what you think of this, either in the comment section or twitter:
https://twitter.com/larsmartinson

*****
Other videos by me:
What Visual Novels & Indie Comics Can Learn From Each Other: https://youtu.be/37HjhnnaGns
4 Time-Saving Tips (from a guy who spent 13 YEARS drawing a comic):  https://youtu.be/6BzCDVR-tr8

******
–Technical Details–
“The Grandfather Paradox” was created using game development software (Unity ver. 5.1.2 and Fungus plugin ver. 2.2). As the introduction says, I intended to release it as a download, which would have allowed the reader to click through the text at their preferred pace.
But the downloadable version had three major problems that made me decide it wasn’t worth releasing in its present state:
1) There’s no way to save or bookmark progress, meaning if you close the program, you have to start reading from the beginning.
2) There’s no way to go back if you click through a line of dialogue too fast.
3) The file size was huge (like 400mb). Efforts to lower the file size resulted in really blurry graphics.
I’m not a programmer, so there’s nothing I can do to fix these issues, so I decided to release this exclusively as a video (at least for now).
But if you’re familiar with Unity and think you could help me sort out these issues, please get in touch!
Related: I’m going to do at least one more of these “Indie comic/visual novel hybrid” things, and doing this one has convinced me a need to collaborate with a programmer.
I was thinking of doing the next one in Ren’Py, a Python-based visual novel engine. Or maybe I’ll take another swing at Unity again. Anyway, if you have experience with either of those engines and would be interested in collaborating, please get in touch. Thanks!

The last blog entry I wrote prior to this one concluded with me writing “expect more frequent blog updates in the future”.

That entry was written almost nine months ago.

So yeah, it’d be an understatement to say that I’ve been truly awful at updating this blog. This is particularly bad considering the third and final book of Tonoharu is releasing in just a few short weeks. But oh well. Only thing to do now is try to be better about it from here on out.

So rather than vaguely promise “more frequent” blog entries, lemme be a bit more concrete. I’m going to post a new blog entry every Monday morning until at least the end of the year, and hopefully beyond that. Some of these entries will be substantial, others might just be a link to a YouTube video or something. But there will, in the very least, be something.

I’ll save details for future entries, but to just briefly recap on what’s happened in the past nine months:

Tonoharu: Part Three will be released in November of this year.
The books have already been printed and bound, and at the time of this writing are on the boat over from South Korea. I might have copies available for sale through my website as early as October. Will update on the blog when I know more. (Really!)

I’ve moved back to the United States as of a couple weeks ago.
People who read the blog back when I actually updated it may recall I was living in Kyoto last time I wrote. My work contract has concluded, and so I’m back in the States (for now). I’ll write more about my feelings about this and what I plan to do from here on out in future blog entries. (I swear!)

I’ve started post-Tonoharu artistic work, and have 95% completed a short test project.
Having worked on the same series for so dang long, I was anxious to try something completely different. So different in fact that I felt like it was a good idea to try out a short test project or two before I tackle anything significant. I’ve already almost finished one of these test projects, and hope to release it by the end of the year. Again, future blog updates will cover this in complete detail. (No kidding!)

My apologies to anyone who came to this blog over the past few months looking for new entries; I’m sure the vast majority of people gave up long ago, but like I say, there will be frequent updates for the next few months or so.

Anyway, see you back next Monday!

My parents bought a used Prius a few months ago, and I saw it when I visited America this summer. The dashboard display reminded me of a cheesy, unrealistic display you’d see in sci-fi movie from the 80s. Just look at this:

Everything about this looks fake to me. The weird, segmented gauge on the right, all the random little numbers and abbreviations… but the icing on the cake is the phrase “Hybrid System Indicator”. I mean, really? It just reeks of meaningless, high-tech-sounding nonsense.

Even funnier is the secondary “Energy Monitor” display. Check this out:

Doesn’t that look like something from Total Recall or something?

I suspect part of the reason for the Prius’ dashboard design is rooted in the whole “life imitates art” thing. They probably wanted something that looked high-tech, so what better way to evoke that than with a design that looks like it came from a sci-fi movie? I probably would have drawn inspiration from movies that came out after Reagan left office, but whatever, to each his own.

Either way, I hereby deem this little piece of reality to be unrealistic.

Hey all! I promised new blog entries every Monday, but I’m flying from the US to Japan tomorrow and with all the preparations to get ready just didn’t have time to get a blog entry ready. So I’m taking the week off. New entry on next week!

Anyone who’s had the misfortune to see me navigate knows I have a terrible sense of direction. East/West/Left/Right… just can’t keep them straight.

So one thing that really drives me nuts is how free-and-easy they play with the cardinal directions on the “you are here” maps at train stations in Japan.

To my mind, north should pretty much always be “up” on a map, especially if it’s a map designed for people unfamiliar with an area (i.e. anyone using a “you are here” map). But in Japan, north can be any damn direction you can think of. 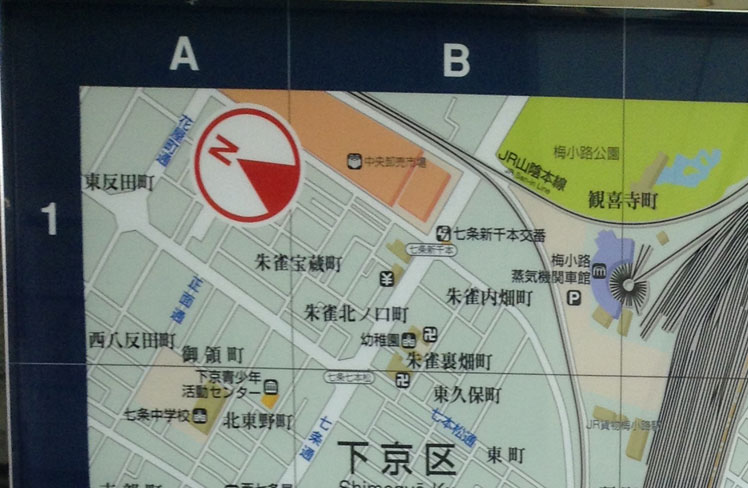 On this map, north is what would traditionally be northwest, thereby making all the streets unnecessarily slanted.

Here’s a map where north is what would traditionally be west. 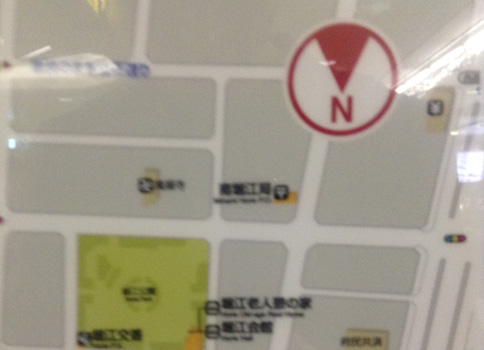 And finally, here’s a map where north is pointing straight down (pardon the crappy blurry photo). What possible reason could you have to design a map like this? For the one where north is pointing left, maybe they had a landscape-orientated map but wanted to show more to the north and south. Still a bad idea, but I can at least I can imagine a justification. But to have north pointed towards literally the opposite direction you’d expect? What the hell Japan? 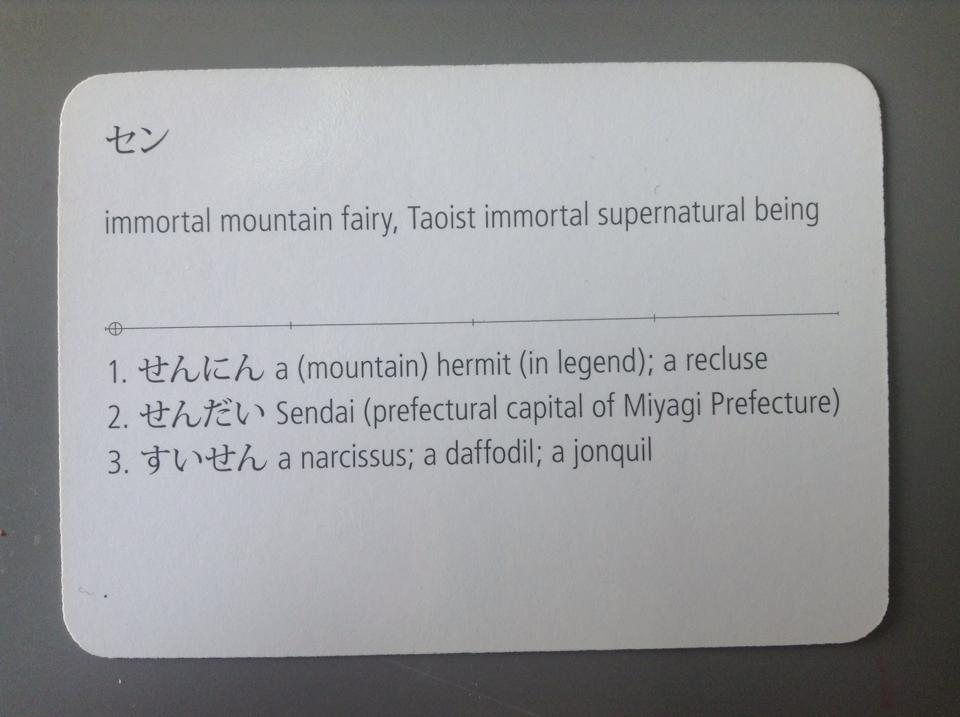 I’m currently studying for the highest level of the Japanese Language Proficiency Test. The test is intended for non-native speakers, so even though it’s the “highest” level, you really only need the reading comprehension of a typical Japanese high school grad to pass, and most of the vocab and kanji seem pretty practical.

That said, it’s sort of hard to not feel like I’m scraping the bottom of the barrel of when I’m studying the kanji for “immortal mountain fairy”. Oh well, at least it will come in handy for all the Japanese language “Twilight” knockoffs I’m intending to write!