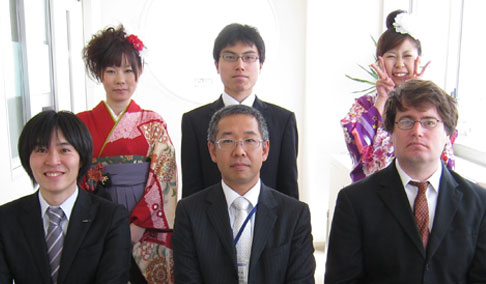 By Wednesday evening of next week, my tenure as a Monbukagakusho research scholar will officially be over, and I’ll be back in the United States for the first time in two years.

It hasn’t even begun to sink in, but that’s par for the course for me. In addition to Japan I’ve previously lived Thailand and Norway for extended stays, and in every case the imminence of my return to the States doesn’t really hit me until I board the plane. Or until the first time I handle dimes, nickels and quarters again. Or until I step out into Minnesota air that’s thirty degrees colder than the air I had breathed half a day before.

I came to Japan to study East Asian calligraphy in the hopes that it would improve my comics, and it has, profoundly. But after two years I think the law of diminishing returns has started to kick in, so the timing to pack it in and move on is probably about right. Also, this had been the longest continuous stretch that I’ve ever been abroad, so I’m really excited to see family and friends again.

On the other hand, I’ve had such a great experience here that I’m sad that it’s come to an end. My Japanese has finally reached the point where I can actually communicate with people in a semi-normal manner, and as such I’ve made much closer Japanese friends than the last time I stayed here. So it’s harder to say goodbye to them than the last time I lived in Japan. Oh well, all good things must come to an end.

By no means am I done with traditional East Asian art. I plan to continue to study calligraphy on the side, and hope to study sumi-e ink painting as well. Regular readers may recall that I’m working on a comic book about East Asian calligraphy, and I intend to eventually finish that as well (don’t hold your breath, though).

Well, I’ve got a lot of packing and last minute preparations to do, so I’ll leave it at this. I’ve prepared a couple entries to go up the next two Fridays so I don’t have to worry about them while I’m settling back in to life in the States. After that I’ll write about what’s in store for me next. So stay tuned, dudes!

Starting today (Tuesday, February 23), some of my work will be on display here in Tokushima, Japan. It’s a very small, informal group show for Shikoku University’s Calligraphy Department research students (all three of us).

My contributions amount to two pieces of mediocre calligraphy, and about ninety pieces of original art from Tonoharu: Part Two. Here are the deets:

See you all there!

What’s that you say? You live on the wrong side of the planet and I haven’t given you enough notice to book a ticket to Japan? In that case, here’s a few images of what you’re “missing”… END_OF_DOCUMENT_TOKEN_TO_BE_REPLACED 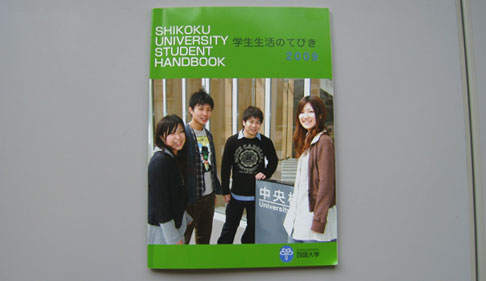 Above is the cover of this year’s student handbook for Shikoku University. Looks fine at first glance, but take a look at the sweatshirt of the guy on the right: 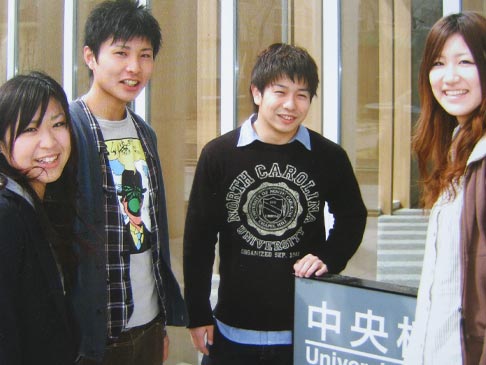 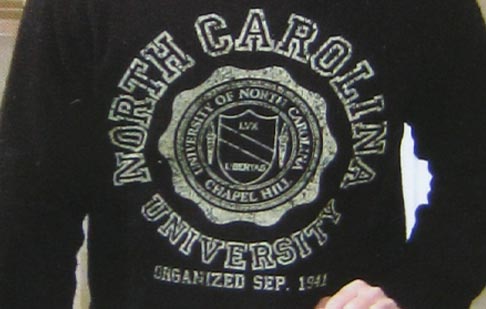 Whoopsie. Not a big deal, but I just find it funny that they’re advertising another school on the cover of the book they give to new students.

Here’s a couple books used by some of the other grad students in the Calligraphy Department: 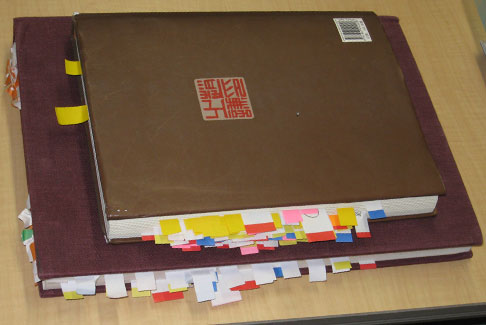 Doesn’t it eventually reach a point where it becomes easier to just flag the pages you aren’t interested in?

In last week’s blog entry, I wrote about the first of two cultural surprises I encountered during my current stay in Japan to study calligraphy at Shikoku University. The subject of this entry is the second surprise, which involved…

Attitudes towards Dating
A while back I was talking with a friend/classmate, and during the course of our conversation he offhandedly mentioned that two people in our class that were dating. He saw I was surprised to hear this, and inquired “Well at least you know that So-and-so & So-and-so have hooked up, right?” This piece of what was apparently common knowledge was also news to me.

I wasn’t so much surprised that I was out of the loop; my Japanese comprehension isn’t exactly perfect so I miss a lot, and my classmates have several other classes together that I’m not in. What really surprised me is that I can’t remember ever seeing the respective boyfriends & girlfriends so much as even talk to each other. Like, ever. END_OF_DOCUMENT_TOKEN_TO_BE_REPLACED

Prior to coming to Tokushima to study calligraphy earlier this year, I had lived in Japan on four separate occasions. With more than three years of experience under my belt, I figured my grasp of Japanese culture was pretty solid, and didn’t expect any real surprises this time around. Having been here for just four months now, I’ve already seen this assumption get proven wrong twice (and counting).

It was pure arrogance to assume that my knowledge of Japanese culture was somehow comprehensive (or even could be), but especially considering the narrow scope of my previous experience. I was unable to communicate beyond caveman grunts for most of it, and my contact with Japanese people my own age was all but nonexistent. Working as an assistant English teacher, most of the people I met were either students or teachers, so everyone was either ten years old, or in their fifties.

This time around I’m in a university setting, so I’m surrounded by people my own age (actually most of them are five or ten years younger than me, but as I’m a cartoonist & blogger, it’s probably safe to assume we’re at about the same maturity level). And my Japanese is just starting to approach the level where I can actually make friends with people who don’t know any English. So I’m getting a glimpse of Japan I didn’t have access to before, leading to the two before-mentioned instances of mini-culture shock.

The first one being… END_OF_DOCUMENT_TOKEN_TO_BE_REPLACED