Any handwritten line could be thought of as a record of energy. You move your hand over a surface, and the writing implement you’re holding leaves a trail behind recording that movement.

A number of factors affect this “energy record”, including the surface you’re writing on, the writing implement you’re using, and how your hand moves. Lines are two-dimensional, but energy changes in the third dimension affect them as well. Press down hard and you get thick, dark lines, whereas a light touch results in lines that are thin and faint. Surprising variety and nuance can be achieved in the course of a single line.

It’s easy to follow the energy trail of a short line, even if it occasionally loops over on itself:

But when lines start looping over on themselves repeatedly, or if you layer more and more lines on top of each other, their energy records become less and less discernable:

If a multitude of lines follow along the same general path, as is often the case in sketches, they might cumulatively hint at flows of energy, but these flows will be fuzzy and poorly defined: 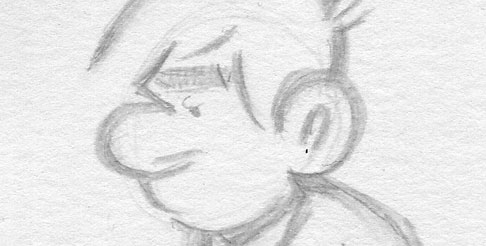 In more chaotic arrangements of lines, like in scribbles, the energy record becomes almost completely obscured, and amounts to little more than static:

I’ll get into what this has to do with East Asian calligraphy’s uniqueness in my next entry.