Here’s a little webcomic/slideshow thing I made and posted to YouTube a while back. I never posted it to this website so I figured may as well!

This was *supposed* to be something you’d view on a website, clicking through the text as fast or as slow as you prefer. But I could never get it to work smoothly. Just don’t have the technical chops yet! Oh well.

The Japanese language has stock phrases that are always used in certain situations. Before you start eating a meal, you say “Itadakimasu” and when you’re done you say “Gochisosama deshita”. These phrases are so entrenched that Japanese people even say them when they’re by themselves and no one is around to hear them.

There are also stock phrases for when you leave and return home. When you go, you say “Ittekimasu!” (I’m leaving) and the whoever’s still at home says “Itterasshi” (Have a safe trip). Then when you come back you say “Tadaima” (I’m home) and whoever’s home says “Okaeri” (Welcome back).

I was surprised to hear from a Japanese friend who lives alone that she still says “Ittekimasu!” and “Tadaima”, even though there’s no one to hear her and offer the reply phrases. I couldn’t help but laugh, because imagining doing the same thing in English comes off as a little sad. 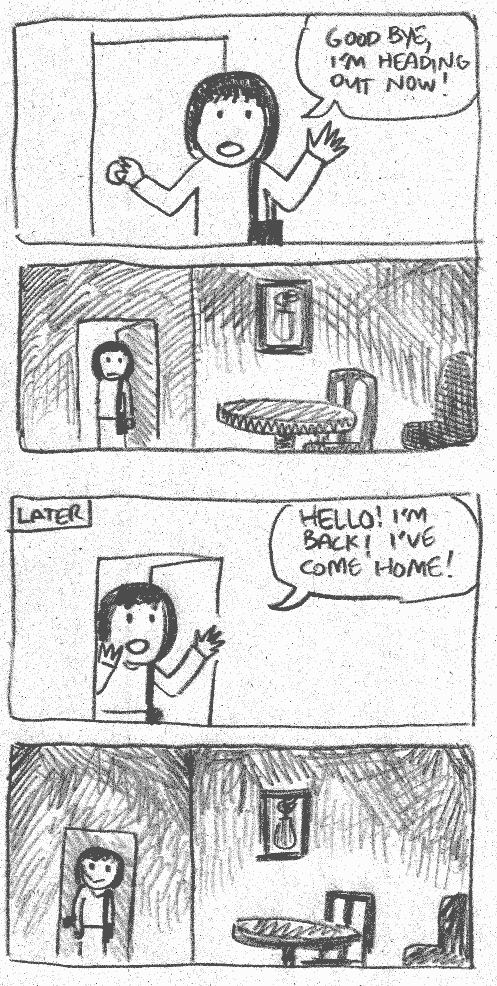 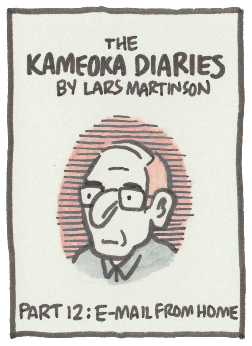 [Obligatory Ad] Digital collections of Kameoka Diaries comics are available in HIGH DEFINITION (i.e. twice the resolution of the images shown here) for just ONE DOLLAR apiece! Plus they contain exclusive content! Check ‘em out! 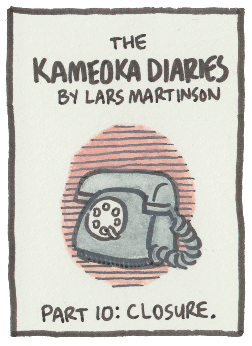 [Obligatory Ad] Digital collections of Kameoka Diaries comics are available in HIGH DEFINITION (i.e. twice the resolution of the images shown here) for just ONE DOLLAR apiece! Plus they contain exclusive content! Check ‘em out!

Man, I haven’t written a new blog entry in forever. Here’s a little update about what’s been going on in the six weeks since my last update.

Tonoharu Update
For anyone keeping track: there are now less than 80 new copies of Tonoharu: Part One left in the world (to the best of my knowledge). On Halloween I shipped 69 copies to the distributor. That leaves me personally with FIVE signed copies left. Once those are gone, that’s it; no more copies left.

I plan to reprint, but I haven’t really even started the ball rolling on that, and probably won’t get around to it for a while yet. The new printing probably won’t come out the second half of 2013 or so. So I’ll just say it one more time: if you want a copy of Tonoharu: Part One (especially a signed copy) get it now!

Kameoka Diaries Update
Here’s a bit of cool news I’ve been meaning to announce: the iBooks version of all my digital comics (Kameoka Diaries 1 & 2, and Young Men of a Certain Mind) are now available for sale for around $1 in 18 new countries:

It’d take me waaay too long to make direct links for all those different iBookstores, but if you search for “Lars Martinson” that should lead you to them, I would think.

Speaking of the Kameoka Diaries, I’ve been meaning to upload another installment to the internet; hopefully I’ll be able to get to that within a couple weeks or so, cough…

A new comic by me is up over at BoingBoing.net! You can read it here: