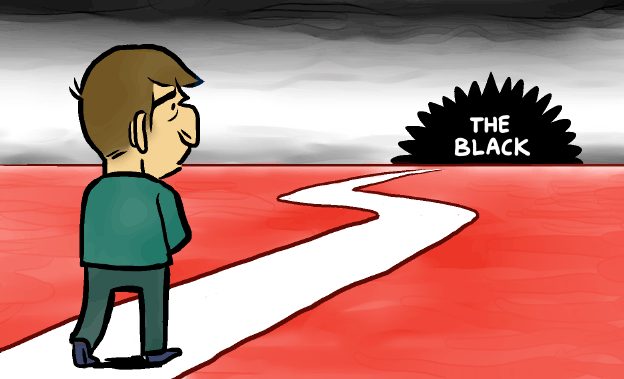 Note to self: in future, don’t try to illustrate accounting terms. It just looks weird and ominous.

Coincidentally, this weekly Monday entry is going up on the last day of October. Since November is the official release month of Tonoharu: Part Three (i.e. the month when it will start popping up on store shelves and on Amazon) I thought now would be a good time to report on Tonoharu: Part Three’s financial prospects. (The perfect Halloween topic, right? I know it scares me anyway!)

As some people may not know, Tonoharu: Part Three, and all the volumes that preceded it, are self-published. I work with the good people at Top Shelf Productions / IDW to get the book distributed across America and around the world, but when it comes to paying the book printer and stuff like that, that’s all on me.

Since “the buck stops here”, I can give you a fairly accurate estimate of how much that costs. Once all the dust settles, accounting for pre-press expenses, printing, shipping, advertising, sending out review copies, and other miscellaneous expenses, I anticipate the cost of publishing Tonoharu: Part Three to be around $9000, give or take.

So…yeah. Fancy hardcover books with two-color interior pages don’t come cheap. And that’s just the actual money I paid to other people/companies. That’s not accounting for the massive personal time investment I devoted to drawing/designing/promoting the book.

But let’s just ignore the time and effort I put into creating and publishing Tonoharu. That’s pretty hard to put a dollar amount on, and I enjoyed doing it (for the most part), so let’s just say that it was my hobby or something. I’m comfortable saying Tonoharu: Part Three will have broken even if I recoup the $9000 in actual expenses.

So how likely is that? Well, obviously it’s still way too early to say, but I’m cautiously optimistic for a couple of reasons.

The first is based on historical data. I’ve somehow managed to turn a profit on Tonoharu every year since Part One was first released back in 2008.

Now, I don’t want to put on airs or overstate things. When I say I “turned a profit”, I’m once again writing off all the countless hours I spent on Tonoharu. If I had worked a minimum wage job instead of doing Tonoharu, I’m pretty sure I would’ve come out ahead (financially speaking). So again, I’m classifying the time I spent on Tonoharu as a quasi-hobby. I’m defining profit strictly as bringing in more money than I spent.

And even then, my yearly profits have never been massive or anything, and have only drifted downwards as the years have gone by without a new release. (Last year in particular was only just barely, technically “profitable”.)

But still! I’m actually kind of humbled that people kept buying Tonoharu, especially considering how little I’ve done to market it the past few years. And with the third volume finally upon us, and the new marketing push that goes along with it, I’m confident that the sagging sales will pick up, not only for Tonoharu: Part Three, but for the first two books as well.

I won’t have a good sense of how Tonoharu: Part Three fared until I get that first royalty check from the distributor months from now. After all, that’s where the vast majority of my sales will come from. But they aren’t the only source of sales, which leads to the second reason I’m cautiously optimistic about Tonoharu: Part Three’s prospects.

In addition to sales made though my distributor, I also personally sell books at conventions and through this website. These direct sales make up just a fraction of total sales, but I earn a lot more per book sold, so they have the potential to be a relatively significant source of revenue.

And while distributor sales won’t kick off until next month, direct sales have already begun. Since I first started offering preorders on Tonoharu: Part Three, I’ve brought in around $1500. So actually, I’m already 1/6th of the way to breaking even! Not too shabby, considering the book hasn’t even “officially” come out yet.

Obviously, my ultimate goal isn’t to “just” break even, it’s to actually turn a profit (an audacious goal, I know). But breaking even would definitely be a nice start, and I’m well on my way to that milestone.

No matter what happens from here on out, I just want to take this opportunity to offer my sincere thanks to everyone who bought Tonoharu: Part Three through this website, and to anyone that buys it on Amazon or at a bookstore.

For a little indie cartoonist like me, each sale is pretty significant, and goes a long way to determining what I do in the future. If sales of Part One had been poor, Parts Two and Three would never have materialized. And now that the Tonoharu series is complete, sales of Tonoharu books will help fund future art projects (and pay for extravagances like rent and food). So yeah! Thanks to friends, family, and fans for all your support over the years. It means a lot.

I expect to reveal details about future projects before the end of the year, but for now, back to Tonoharu marketing!

Speaking of which, I’ll be posting a 12 minute YouTube video that I made about Tonoharu pretty soon, maybe even next week. I spent a long time on it and am pretty proud of it, so check back for that! (Or subscribe to my long dormant YouTube channel if you want to know right when it goes up!)

Here’s hoping for a successful launch!