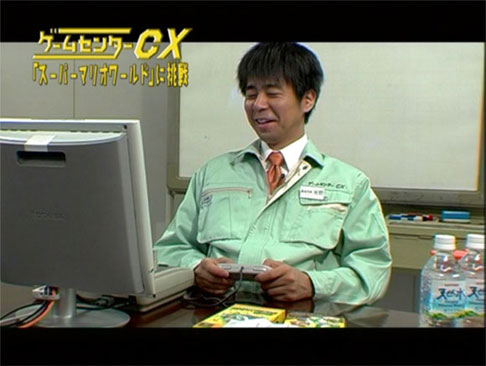 As I confessed in a previous entry, I enjoy watching people play video games. I don’t know if it’s because it evokes nostalgic memories of passing around the NES controller at sleepovers, or maybe I enjoy it for the same reason that normal people enjoy watching sports. Whatever the reason, I’ve spent countless hours watching YouTube videos of complete strangers documenting their video game playthroughs.

When I first started watching them, I remember thinking that this form of entertainment couldn’t exist without the internet. It was to too weird and niche; I figured it just didn’t have enough commercial potential to warrant mainstream production/distribution.

As it turns out, I was wrong. In 2003, Fuji TV introduced a show called Game Center CX in Japan. During its first season, GCCX resembled any old video game show, with developer interviews and game previews taking center stage.

Beginning with the second season, the focus changed, and the show began to center around the host’s attempts to beat classic video games, from start to finish, in just a day (or occasionally, two or three days). The funny thing is, the host, Japanese comedian Shinya Arino, kind of sucks at games. He’s just so cute and good-natured you can’t help but cheer him on. I’ve been a fan of the show since I first discovered it five years ago.

I’ve always wanted to recommend the show to my video game loving friends in the States, but since it was in Japanese I always abstained. So I’m pleased to announce that the video game website Kotaku has started running episodes of the show with subtitles (and a somewhat irritating dubbed in English announcer). So check it out!

My favorite episode that they’ve run so far: Solomon’s Key