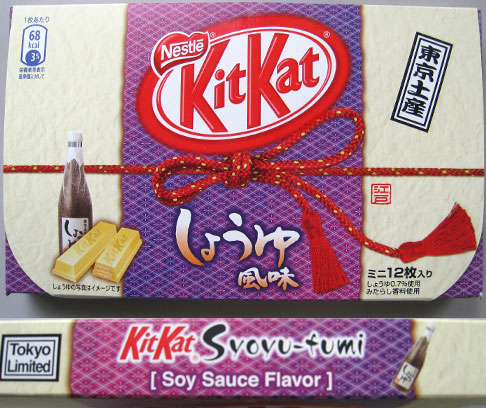 Concept
The candy bar Kit Kat is huge in Japan. I’ve heard it’s because “Kit Kat” sounds a bit like “Kitto Katsu”, which is Japanese for “guaranteed victory”, so people would give them as gifts to students before exams as like good luck charms or something. I can’t be bothered to verify that, something about this ho-hum candy bar really seems to appeal to the Japanese. This flickr set shows over a hundred Kit Kat flavors, the vast majority of which were made for the Japanese market.

I guess when the number of flavors reaches triple digits it’s hard to come up with new ones, but I was still surprised to see a soy sauce flavored variety on a recent trip to Tokyo. This product is a Tokyo exclusive, intended to be bought by visiting tourists to give as omiyage (souvenirs) to colleagues when they return home. 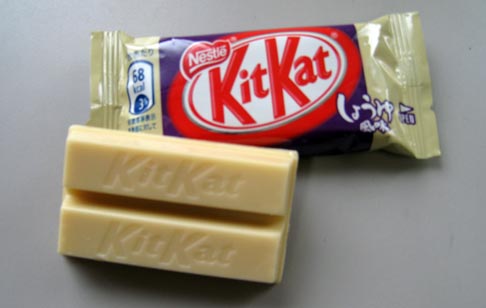 Taste
At first I was baffled as to why they’re white, a color that doesn’t exactly evoke “soy sauce”. A quick taste test resolved the mystery, however: these taste more like white chocolate than anything. Maybe they had just the tiniest hint of saltiness, but even though I was consciously trying to detect that soy sauce flavor, I barely could. If someone handed one of these to me without telling me what flavor it was, I never in a million years would’ve guessed soy sauce.

That’s the secret to making a good soy sauce flavored candy; bury any hint of soy sauce under a mountain of white chocolate.