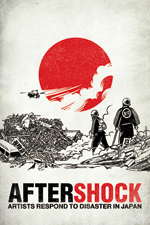 It’s been more than two months since my last update. I don’t know how many regular readers I have, but based on my Google Analytics reports, it’s probably just a couple-few dozen. So to those tens of people,my apologies for not delivering on the weekly updates that are promised on the masthead of this website. What can I say? The full time job has taken a lot out of me, so something had to give. The next couple weeks are super busy so I probably won’t update for a while, but from here on out I’m going to try to update at least once a month (yeesh, talk about a low bar). The end of December should be pretty slow, so I should be able to update more frequently then, for a while at least.

But I digress. What inspired me to get off my butt and update after ten weeks was I wanted to let you all know that Aftershock: Artists Respond to Disaster in Japan, the comics anthology I contributed to, is finally available in paperback. 100% of the proceeds will be donated to relief efforts to the disasters that befell northeast Japan in March of this year. So please consider ordering a copy here:
http://www.biguglyrobot.net/mailorder/