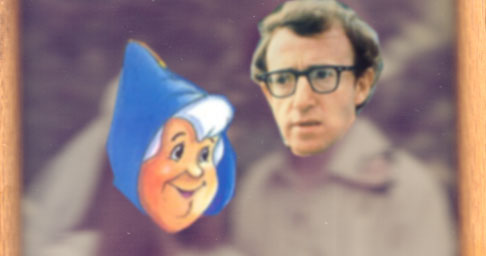 Pictured: My Parents (faces skillfully photoshopped to protect their anonymity)

I probably wouldn’t have started this blog in the first place if I hadn’t thought it would be good way to market my comic books. But that isn’t to say that all these entries are just veiled sales pitches; as best I can, I really try to write about my life and my comics in an honest and unpretentious way.

But since this is a public blog, I’m not as always quite as forthcoming as I might be in a more private forum. I avoided the subject of my ankle injury for several weeks, for one. And up until right now, mention of my living arrangements has also been carefully avoided. Only in one brief sentence of one lone blog entry did I elude to the fact that for the whole of 2007, I lived with my parents, in the basement of their suburban home.

I think the reason I was hushed on this point is because of the general consensus that “adult child living in his parents’ basement” is synonymous with “complete loser”. And I gotta admit, it wouldn’t take too much imagination to turn the details of my life in 2007 into a punch line. Not only was I unemployed, in my thirties, and sans girlfriend, but I actually spent all my time drawing comic books. There wasn’t much chance anyone would mistake me for James Dean or Steve McQueen.

Now, I had my reasons for staying with th’ folks (some might call them “rationalizations”, but I’ll ignore those hypothetical people), and I think that all things considered, it was the right decision. But it certainly wasn’t the sort of lifestyle you could brag about at a high school reunion or a cocktail party, which is why the subject hasn’t made it onto the pages of this blog in the past.

But now that I’m out of my parents basement and in a more socially acceptable living arrangement (studying at a Japanese university… that’s pretty cool, eh?), I’d like to give my parents a public, very long overdue thanks for all that they’ve done for me. They allowed me to live in their home rent-free for a year, they believed in me when other friends and relatives thought I was nuts, and they took care of me when my broken ankle made it impossible for me to do anything for myself; bringing every meal to me for two months straight, and running errands for me so I could in some meager way continue with my book marketing efforts. I can say without exaggeration that I have no idea what I would have done without them.

It’s still unclear if my foolhardy dream of “makin’ it in comics” will ever become a reality, but I’m off to a pretty good start. I managed to get a publishing grant, produce a nationally distributed book, and secure a full, two year scholarship. Not too shabby for a year’s work. All this occurred while I lived under my parents’ roof. I owe much of my success to their patience and support . So thanks, Mom and Dad! I couldn’t have done it without you.